Expertise. Dedication.
Proven Results.
contact us for a free consultation
Over $100 Million in Verdicts and Settlements
Home
Attorney Profiles
Justin A. Harriman 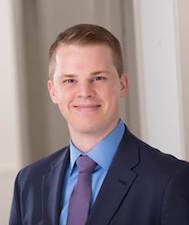 Justin A. Harriman is a Civil Litigation Attorney at Altman & Altman, LLP. Harriman received his Bachelor of Sciences Degree from Boston College as well as his Juris Doctorate from Boston College Law School, making him the firm's Double Eagle. Harriman began his career at Altman & Altman, LLP as a Summer Associate in 2012 and is licensed to practice law in the Commonwealth of Massachusetts.

Harriman's meandering career path before joining the firm allows him to relate to a wide range of clients. From designing and building homes ranging from an igloo in Alaska to a home featured on Extreme Makeover Home Edition, to managing the busiest Chipotle in New England, to working as a private contractor with Secret security clearance for the United States Air Force, there is not much he has not seen or cannot do.

Harriman's practice focuses on the handling of civil matters. He has a wide range of experience handling civil litigation matters including automobile accidents, MBTA accidents, slip and fall accidents, premises liability, and work injuries. Despite his baby face, Harriman is quickly becoming known as a force to be reckoned with and a no-nonsense advocate for his clients. Harriman is available around the clock and is always willing to answer questions from clients.

Outside of the office Harriman is an avid Boston sports fan and likes to think that his arrival in Boston in 2004 heralded a new championship era for Boston sports. He himself is a three season softball player and a consummate bowler. In 2015 he read 77 books. He enjoys going to the movies, a nice dinner out, or a night in playing videogames with friends.

Contact Us
Personal Injury Cases
General Practice
Client Reviews
★★★★★
David was very aggressive and professional with the insurance companies in this settlement of this case. He kept me up to date on a regular basis through the whole process. I can't thank David and his staff enough and strongly recommend them to anyone. - Edward M. Newton MA
★★★★★
On the behalf of all the Bikers in Massachusetts .... Dave Altman is the man you want representing you. He treats you like family from day 1. His team will recovers any and all damages you are entitled too. Tell him Kathy sent you. - elentless MC
★★★★★
Rick Floor is who I often to go to and he is amazing! Great customer service, and always exceeds my expectations but the whole office is always pleasant and helpful when I call or walk in! - Rita
★★★★★
I am not very good at words. I was involved in a horrible accident. David and his team (Thank You Asia & Rick) are wonderful, talented and compassionate. If it were not for their help, I don’t believe the outcome would be as good as it is. I am glad my case is settled, Altman & Altman are my go to team from now on. Thank you so very much. - Christine F M Teixeira
★★★★★
Exceptional team of attorneys, very helpful and knowledgeable. - Nikki Vee
View More
Submit a Law Firm Client Review